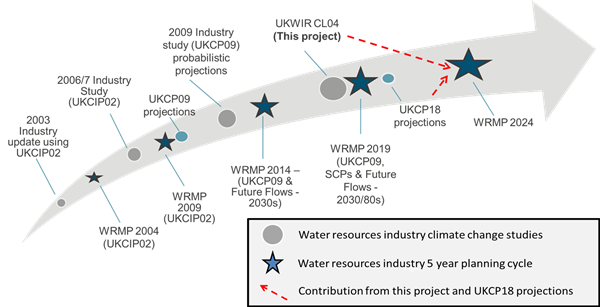 The next round of Water Resource Management Plans (WRMPs) in England and Wales are to be finalised in 2019, with draft plans currently published by water companies. A great deal of effort has taken place to ensure the UK climate change projections being published this November, UKCP18, can build on the work completed for WRMP 2019 and efficiently feed into WRMP 2024.

It was ironic that the dissemination workshop for the project Climate Change Modelling and the WRMP, managed by Neil Whiter with Scottish Water’s Mark Wiliams as Programme Lead, had to be postponed in Mid March.

This was due to the exceptional cold spell with significant drifting snow across the country. The rearranged workshop then took place on the day after the hottest London Marathon on record.

Chris Counsell, from the main contractor HR Wallingford, presented Figure 1 (Figure 1. UKCP09 to UKCP18, to the right) showing how the climate change inputs into the water planning process had evolved with ‘continuous improvement‘’ in mind.

He described how the project began two years ago with the major challenge of anticipating the outcomes of the UK Climate Projections 2018 (UKCP18) due to be published this November. It also had to incorporate the evolving decision-making and risk based planning methods that are increasingly being used.

They also had to anticipate the outputs from Drought Vulnerability Framework (DVF, see UKWIR News 84) which itself built upon the work delivered by the project Performance of Water Supply Systems to Mild to Extreme Droughts, carried out by the Environment Agency.

Fai summarised the scientific advances that have been made since UKCP09. There are many products being provided as part of UKCP18 and Fai described what these might mean for water resource planning. The presentations at the workshop illustrated how much behind the scenes work has been undertaken with regards to both the UKCP18 projections and how they might be used as part of the planning process.

The workshop presented an opportunity for HR Wallingford’s Aodhín McBride to update and get feedback from delegates on the subject of ‘groundwater deployable output’ assessment development’ and discuss potential methods to improve the representation of groundwater resources in WRMP 2024.

Chris Counsell said that the magnitude of the risks from climate change will vary by water resource zone and will not be significant for all. Thus the project guidance document and the on-line web-based tool have been designed such that the effort invested for WRMP 2024 can be targeted, proportionate to the level of risk faced and take into account how much might have changed since WRMP 2019 that have been based on the previous UKCP09 climate projections.